June 1, 2015 from CPA Magazine and written by Michael Burns – “Making a business case for technology investments is challenging – and potentially career limiting. Anything you can learn from our peers’ experience in making these investments can be helpful in crafting a case. \

That is why we decided to run our own IT satisfaction survey in CPA Magazine. It ran from January to April 2015, and is available at cpacanada.ca/ITsurvey15.

QUESTIONS
The survey included a few questions about investments in enterprise resource planning (ERP), customer relationship management (CRM) and business intelligence (BI). We chose these products mainly because they are so widely used and because we have been conducting vendor surveys on them for many years. We also asked questions about industry, company size, system used, deployment (on premise or cloud), cost, satisfaction with implementation, satisfaction with benefits, and lessons learned. We used a satisfaction rating scale where 5=Very Satisfied, 4=Satisfied, 3=Neutral, 2=Unsatisfied, 1=Very Satisfied, and N/A). 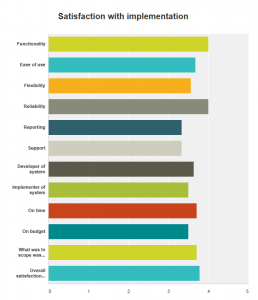 First and foremost, we found that most organizations are generally satisfied with their implementations, as shown in the chart below. Functionality and reliability drew the highest rating with a 4 point average weighting and reporting and support had the lowest with 3.33.

The overall results are encouraging, because we usually hear mostly about failed implementations and not so much about the success stories. Systems have finally become easier to use and the vendors have learned — sometimes the hard way — how to implement them. Vendors want a long-term relationship with the customer because of the recurring maintenance or hosting fees. They also need to have their customers act as a reference to future prospects who often ask for at least two references before making a decision.

Many respondents also felt they had a positive ROI, but most were small businesses with smaller investments and faster payback. ROI is elusive for mid-market and large enterprises. But even with negative ROI, many organizations still make technology investments because a lot of the benefits that are critical to them are not tangible — better decision-making or improved customer service, for example. See the chart below:

The biggest reason we have found for making a technology investment is that the organization thought they had no choice. This can happen because the system is no longer supported or the business has changed in terms of services or volume of business.

Some of the comments on lessons learned were also interesting. For example, respondents spoke of: